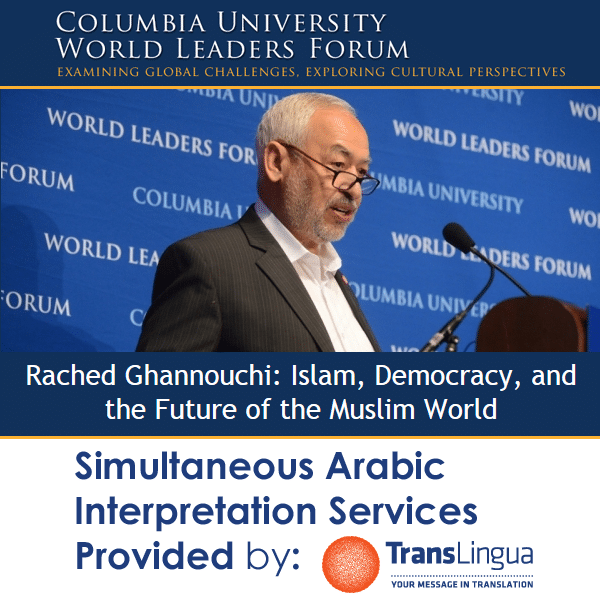 TransLingua is proud to announce their partnership with Columbia University’s Institute for Religion, Culture, & Public Life to provide simultaneous Arabic interpretation services. Rached Ghannouchi, leader of Tunisia’s Ennahdha Party, spoke on “Islam, Democracy, and the Future of the Muslim World” during a two hour presentation on October 1, 2014. The presentation was followed by a question and answer session with members of the audience.

Rached Ghannouchi is the co-founder and president of the Ennahdah Movement, an Islamist group that is currently Tunisia’s largest political party and the dominant participant in a coalition that has governed the country since the October 2011 elections. After spending more than two decades in exile for his political activism, Ghannouchi returned to Tunisia in January 2011 to participate in the country’s democratic transition. Widely recognized as one of the world’s most influential Islamic thinkers and a proponent of Islamic democracy and pluralism, he was named one of TIME’s one hundred most influential people in the world in 2012.  That year, he also was awarded the Chatham House Prize (with Tunisian President Moncef Marzouki) for “the successful compromises each achieved during Tunisia’s democratic transition.”

For more information about Arabic interpretation and translation services in NYC, please contact us at (212) 697-2020. We are also located in Boulder, Colorado and serve clients from around the world.