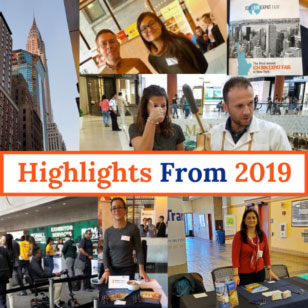 2019 was a really exciting year for TransLingua in the area of Conference Interpretation. Our assignments included

– French interpretation for panel on Women Lead Political Solutions to Sustain Peace, a side event organized by the Permanent Mission of Canada to the UN during UN week 2019

On November 2, 2019 TransLingua exhibited at the Third Annual Ich Bin Expat Fair organized by Heimat abroad for German speaking Expats and their families. There was something for everyone, from seminars on job opportunities and legal support to German schools, Health advice, German food & entertainment, as well as plenty of children’s activities. Translingua always enjoys this event which connects us with the German community in and around New York.

On October 11, 2019 Translingua sponsored the 9th Annual Rocky Mountain Fall Conference organized by the Colorado Chapter of the American Immigration Lawyers Association at the University of Denver Sturm College of Law. We are proud to say that we did not only sponsor the event, but also attended some of the sessions and took the opportunity to meet with the lawyers to learn how we can best support their efforts in representing immigrants. We look forward to continuing our work with the Colorado Chapter of AILA in 2020!

View Photos Of Our Past Events Here!