The History and Traditions of Epiphany from Around the World 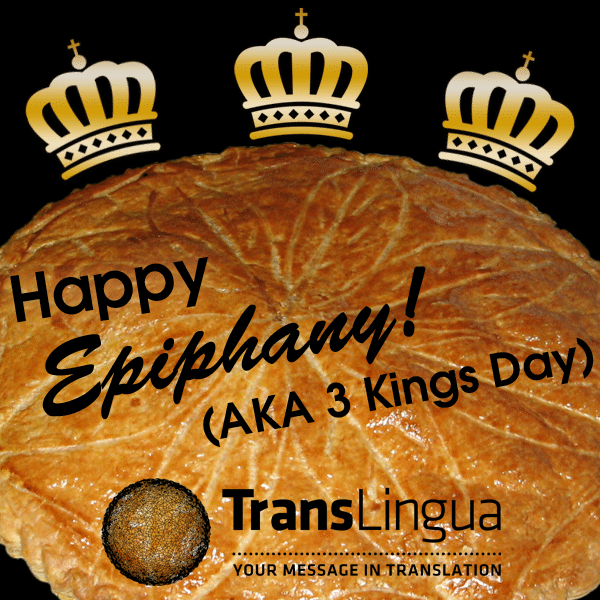 Epiphany has its roots in Greek and means “Manifestation,” “striking appearance” or “Vision of God” aka Three Kings’ Day, is a Christian holiday that celebrates the revelation of the Son of God as human in Jesus Christ. The traditional date for the feast is January 6.

Epiphany is celebrated by both Eastern and Western Churches with a few differences. For Western Christians the feast primarily commemorates the coming of the Magi (the 3 Kings) with only a minor reference to the baptism of Jesus and the miracle at the Wedding at Cana. Eastern churches celebrate the Baptism of Christ in the Jordan. In both traditions the essence of the feast is the same: the manifestation of Christ to the world.

Every country and culture has a unique way of celebrating the Epiphany. In some cultures, the greenery and nativity scenes put up at Christmas are taken down at Epiphany. In other cultures these remain up until Candlemas on February 2. In countries historically shaped by Western Christianity (Roman Catholicism, Protestantism) these customs often involve gift giving, “king pastries” and a celebratory close to the Christmas season. In traditionally Orthodox countries, the celebrations are usually focused on water activities, baptismal rites and house blessings.

In Greece, Cyprus and the Greek diaspora throughout the world, the feast is called the Theophany or Phota (Colloquial Greek for “Lights”) and customs revolve around the Great Blessing of the Waters. A long procession is formed and follows whatever road leads to a body of water. Leading the procession are the sacred icons, followed by the priests and oftentimes musicians. At the end of the ceremony a cross is thrown into the water and the men of the community jump in the water to retrieve it. Whoever finds the cross in the icy waters has luck for the rest of the year.  This “water sanctification” ceremony represents the Baptism of Christ and carries the notion of purification.

In Spain and some Latin American countries they call it El Día de los Reyes (The Day of the Kings), the day when three Kings – Melchior, Gaspar, and Balthazar – representing Arabia, the Orient, and Africa, arrived on horse, camel and elephant, bringing respectively gold, incense and myrrh to the baby Jesus. Before going to bed on the eve of January 6, Spanish children polish their shoes and leave them ready for the Kings’ presents to be put in them. The next morning they will find presents in their shoes, or if they were naughty during the year, coal (usually a lump of hard sugar candy dyed black, called Carbón Dulce). Most towns in Spain arrange colorful parades representing the arrival of the three kings.

German speakers call it Dreikönigstag (Three Kings’ Day). January 6 is a public holiday in Austria, three federal states of Germany, and three cantons of Switzerland. Germans eat a Three Kings cake, a golden pastry ring filled with orange and spice representing gold, incense and myrrh. In Switzerland the cakes look like a crown composed of seven large buns in a round pan. They are usually made of a rich Challah bread dough with cardamom and topped with pearl sugar. They can be purchased in bakeries or supermarkets with a gold paper crown included.

In England, the celebration of the Night before Epiphany is known as Twelfth Night, the First Night of Christmas being December 25–26 and the Twelfth Night January 5–6. The traditional dish for Epiphany in English is Twelfth Cake, a rich, dense fruitcake. As in continental Europe, whoever finds the baked-in bean gets to be king for a day. Spicy or hot food items, such as ginger snaps and spiced ale, are considered proper Twelfth Night fare, recalling the costly spices brought by the three Wise Men.

In Egypt the feast of the Epiphany is celebrated by the Coptic Orthodox Church. It falls on 11 Tobe of the Coptic calendar and represents the moment – during the baptism of Jesus – when the skies opened and God revealed himself to all as father of Jesus and mankind. As such it was a moment of epiphany or revelation in modern terms. Since the Epiphany is one of the seven great feasts of the Coptic Orthodox Church, it is a day of strict fasting religious celebration. The day is related to the blessing of waters used in church celebrations, and a special day for baptisms. It is also a day on which many houses are blessed with water.

In the 1500s the Swedish-Finnish Lutheran Church called Epiphany “Day of the Holy Three Kings”, while before this, the older term Epiphania was used. Between 1973 and 1991 Epiphany was observed in Finland on a Saturday each year no earlier than January 6, and no later than January 12. After that time, the traditional date of January 6 was fixed and has since been observed as a national public holiday. Finnish gingerbread cookies in the shape of a star are served on this day.

In France, since the Middle Ages, Epiphany has been celebrated with the Galette des Rois, the King’s cake. It is a round, flat and golden cake made with puff pastry and frangipane, an almond-flavored filling. In southern France a crown-shaped brioche filled with fruit is served. Both types of cake contain a porcelain or plastic figurine called fève. The person who gets the piece of cake with the charm becomes “king” or “queen” for the day and wears a gold paper crown. This person also has the obligation to offer a beverage to everyone around the table (usually a sparkling wine or champagne) or volunteer to host the next king cake celebration at their home. This tradition often extends the festivities through all of January!

Celebrations in Guadeloupe, Martinique and the rest of the French speaking Caribbean have a different feel from elsewhere in the world. Epiphany here does not mean the last day of Christmas, but rather the first day of Carnival, a period of joyous celebration which lasts until the evening before Ash Wednesday.

The Irish call it the Feast of the Epiphany or Little Christmas or Women’s Christmas. On that day, women traditionally rested and celebrated for themselves after all the cooking and hard work of the Christmas holidays. Today, women typically dine at a restaurant or gather in a pub in the evening. They may also receive gifts from children, grandchildren or other family members on this day. Other Epiphany customs, which symbolize the end of the Christmas season, are popular in Ireland. They include the burning the sprigs of Christmas holly in the fireplace which have been used as decorations during the past twelve days.

In Italy the Epiphany is associated with the figure of the Befana, a broomstick-riding old woman who, in the night between January 5 and 6, brings gifts to the children, or a lump of “coal” (really black candy) for those who were misbehaved during the year. Legend has it that, having missed her opportunity to bring a gift to baby Jesus together with the Three Wise Men, she now brings gifts to other children on that night.

In the Maronite Church, in accordance with the ancient tradition, Epiphany represents the public announcement of Jesus’ mission when he was baptized in the Jordan by John the Baptist. On the occasion, Lebanese Christians pray for their deceased. It is celebrated by attending church, most often the midnight mass, as the Christ is passing to bless homes.

In Mexico the evening of January 5 marks the Twelfth Night of Christmas and is when the figurines of the three wise men are added to the nativity scene. Traditionally in Mexico, as with many other Latin American countries, it is not Santa Claus, but the three kings who are the bearers of gifts, leaving them in or near the shoes of small children. Mexican families also commemorate the date by eating Rosca de reyes.

In the Philippines the Christmas season traditionally ends on Epiphany, known colloquially as “Three Kings” or Tres Reyes. Filipino children also leave their shoes out, so that the Kings will leave behind gifts like candy or money. Most others on this day simply give the common greeting of “Happy Three Kings!”

In Poland, Epiphany is celebrated in grand style with huge parades welcoming the Wise Men, often riding on camels or other animals from the zoo. The Wise Men pass out sweets, children process, carols are sung, and living nativity scenes are enacted. The Poles also take small boxes containing chalk, a gold ring, incense and a piece of amber, in memory of the gifts of the three Kings, to church to be blessed. Once back home, they inscribe “K+M+B+” and the year with the blessed chalk above every door in the house, according to tradition, to provide protection against illness and misfortune. The letters are said to stand either for the names of the Three Kings – Casper, Melchior and Balthazar – or for a Latin inscription meaning “Christ bless this house.” They remain above the doors all year until they are inadvertently dusted off or replaced by new markings the next year. On January 6, as in much of Europe, a Polish style Three Kings cake is served with a coin or almond baked inside. The one who gets it is king or queen for the day. According to Polish tradition, this person will be lucky in the coming year.

In Puerto Rico, Epiphany is an important festive holiday, and is commonly referred to as Día de Los Tres Reyes Magos, or Three Kings’ Day. It is traditional for children to fill a box with fresh grass and put it underneath their bed for the Wise Men’s horses. The three kings visit the children’s homes during the night of January 5, and as their horses feed on the grass, they leave presents for the children. Wood carvings of the Three Kings are a staple of Puerto Rican arts and crafts, and to many, these three men (called not only wise, but also saints) are representative of Puerto Rican culture as a whole. On the eve, January 5, the “Rosario de Reyes” or “Víspera de Reyes” is celebrated with songs dedicated to the Kings, usually before a little table with figures of the Nativity and the Kings or with the Kings and their horses. This celebration is accompanied with a chicken soup, snacks, and drinks.

In Russia the Epiphany is celebrated on January 19 and marks the baptism of Jesus. As elsewhere in the Orthodox world, the Russian Church conducts the rite of the Great Blessing of the Waters. Believing that on this day water becomes holy and contains special powers, Russians cut holes in the ice of lakes and rivers, often in the shape of the cross, to bathe in the freezing water.  Participants dip themselves three times under the water, honoring the Holy Trinity. The ritual is supposed to symbolically wash away their sins from the past year and provide a sense of spiritual rebirth. Orthodox priests bless the water and rescuers are on hand to monitor the safety of the swimmers in the ice-cold water. This practice was fairly uncommon in the czarist days, but has become popular again since the 1990s.

In Louisiana, as in the Caribbean, the Epiphany marks the beginning of the Carnival season, during which it is customary to bake King Cakes. They are round, filled with cinnamon, glazed white, and coated in traditional carnival color sanding sugar. As is the custom in France, the person who finds the doll (or bean) in the cake must provide the next King Cake. The interval between Epiphany and Mardi Gras is sometimes known as “king cake season,” and many may be consumed during this period. The Carnival season begins on Epiphany, and there are many traditions associated with that day in Louisiana and along the Catholic coasts of Mississippi, Alabama, and Florida. King cakes are first sold then, Carnival krewes begin having their balls on that date, and the first New Orleans krewe parades in street cars are held that night.